After the hundred mile mark everything funnels into one steady stream of conscious, a oneness with the entire expanse of the infinite, ticking off, inch by inch, mile by mile, as a gray blur of asphalt in the periphery and constantly changing patterns of filtered sun light through the trees. In the clearings, the sun is bright and warm in spite of the unseasonable coolness of the day, the pastures stretch early summer green to the horizon, and hazy blue mountains scallop the skyline. And I feel calm, infinitely calm, the kind of calm I needed, the kind that was there all along waiting for the perfect day to sneak up and tap me on the shoulder. 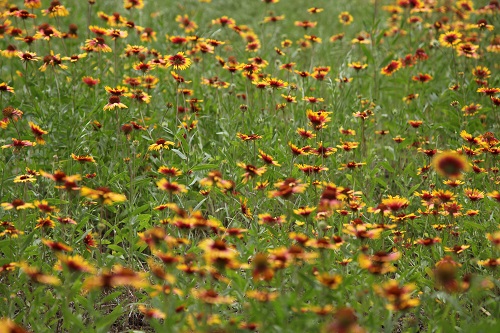 Maybe although I’ve left overwhelmed in the rearview but still feel pressured most of the time, maybe because I feel pulled in every direction by all the forward impetus of various projects happening all at once, I passed the need to pace myself and landed square on the need to stop, get on the bike, and leave it behind for a day in a blur of exhaust and noise. 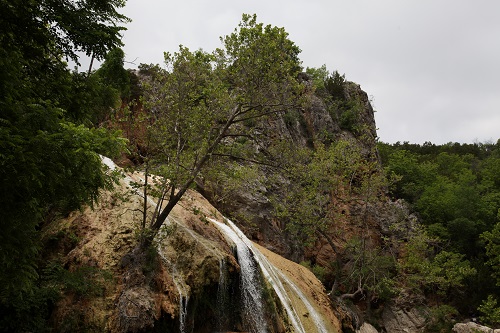 Maybe the need to be unleashed seems irresponsible to some people, but I’d wager those people are perpetually overwhelmed, miserable, and stressed. For the rest of us, keeping our responsibilities handled with some regular sense of deadlines is a must, but equally a must for persons like me is the need to break loose, figuratively arrange all those responsibilities in neat and tidy stacks that will still be there when I get back then disappear for a day. A need to ride until my mind is quieted, until everything being locked together by speed, momentum, and rotation is visible, a concrete concept, a two wheeled sunyata, until hours and miles later fatigue and physical soreness pull me back into the now and it’s time to return to responsibility. 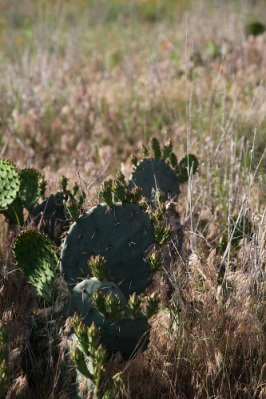 Sunday was one of those days. The day started unseasonably cold, barely in the fifties which in an Oklahoma May is something, and gray overcast, misty, early spring like, some impending risk of storms exciting the weathermen. But I was going to ride, damnit. This was planned (for once) and it was going to happen. There has simply been so much happening for nearly a year now, but especially the last few months, I really feel the constant pressure of needing to tick off one to do after another, and although all the growth and (rapid) forward momentum is unbelievably exciting and blissfully fulfilling, I still have to break away at times, even if just for a day. I enjoy responsibly and accomplishment, but dislike “busy” and too much going on at once (I am not a multi-tasker), thus I’ve learned that the best course of action when everything piles up is to stop completely and step away until it becomes clear again, reprioritize, and start again.

But due to the weather, rather than leave as early as originally planned (Josh was not thrilled with my plan for a 6:30 a.m. departure on his day off), time had to be taken to gather a half cow’s worth of leather gear for layers and in that easy, unhurried mode, I made a nice breakfast and enjoyed a cup of coffee before we were off in the heaviness of the morning’s rainy air, bundled more than should happen in mid May, but too excited to care.

By the time we were out of the county, worries about responsibility had melted away into engine drone and quiet headspace. Vibrant green pastures full of bald faced cattle and horses whizzed past and a dreamlike heavy mist rolled across the green with us until 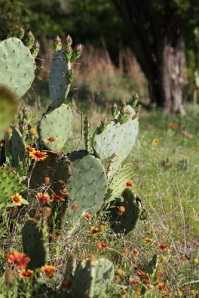 the clouds gave way enough for the sun to shine and burn off the morning cold. Young mimosas waved their feathery stems in the remarkably light wind and honeysuckles filled the air with the one smell I love more than any other, the smell that takes me back home.

We rolled through town after small town taking in the sights from farms to former oil money buildings now crumbling, before finally reaching the point where the highway really begins to wave, bend, and bow. This was Highway 77, a winding path through open country and barbwire, scissortail swallows whirring, with an occasional small old Western town square and a handful of lazy Sunday drivers slowly milling by. 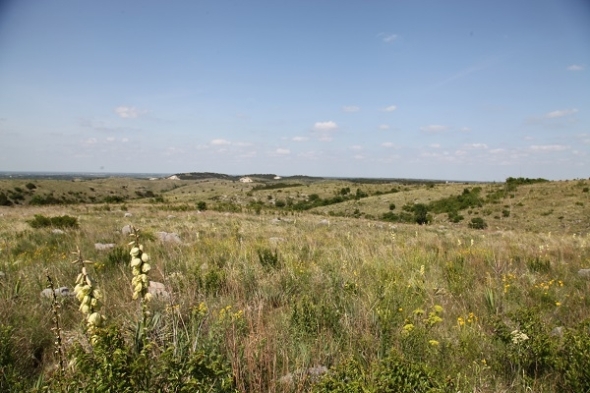 As we rounded the last curve into the Arbuckle Mountains shortly before Turner Falls, my nostrils filled with familiar smells, smells I know from home in the Ozarks. Mineral springs, cedar, and wildflowers, and in a breath I was home. That is the smell of some of my fondest memories, a smell that makes me want to stay in the forest, in nature, and never see an urban landscape again. I wanted to hike, to explore, to see what was up every hill and around every corner, so we did, a good share of it anyway. A day filled with exploring, we hiked the better part of the first few hours before riding more, 77, 110, and every other windy highway and back road that looked tempting. After a light lunch in Davis at the only eatery we could find open, we returned to Turner Falls Park and continued our hiking and exploring. 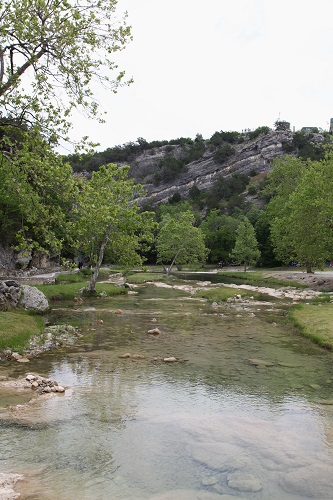 Perhaps because hours spent exploring the woods comprised so much of my childhood, or perhaps because of that natural spring smell I know in my heart, I felt like a kid again, exploring with my best friend. To say Turner Falls is gorgeous is an understatement. There is even an abandoned castle well worth exploring. (A follow up post about the Collins Castle will be coming in a few days.) 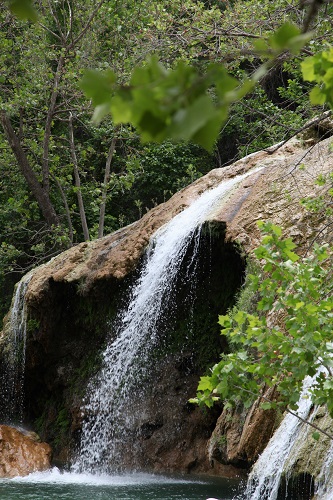 The Arbuckle Mountains spring up suddenly from the Oklahoma landscape, rocky and sand colored, coated with a surreal patchwork of saw grass and dark velvety green cedars. They roll gently along and disappear into the earth again in only a short distance of about fifteen miles, in the midst of which is the oasis of Turner Falls, a stunning waterfall created by natural springs. 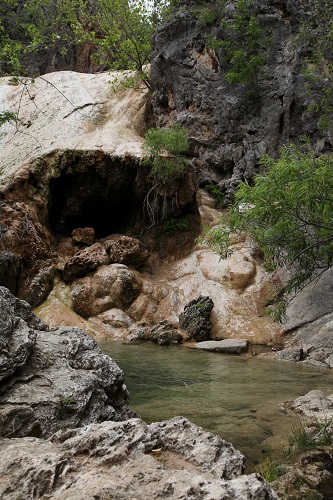 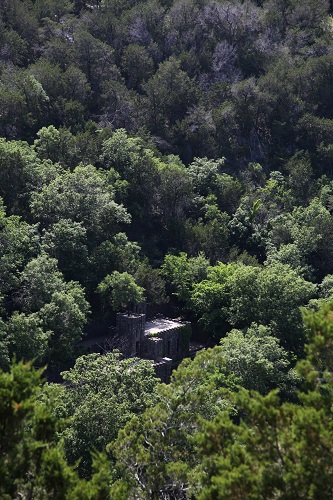 Out from the depth of an aquifer, the crystal blue spring water rolls along slick limestone like a cave interior exposed, a strange moon like surface, and pours down the sand colored arched fall face into a gorgeous teal blue dammed swimming hole. From the dam it flows into beautiful clear creek beds and down to other swimming holes. Immediately surrounding the falls are caves and natural rock formations, a geologists paradise, and ample steep trails for hiking and exploring, with man-made stairs where necessary for ease of passage. 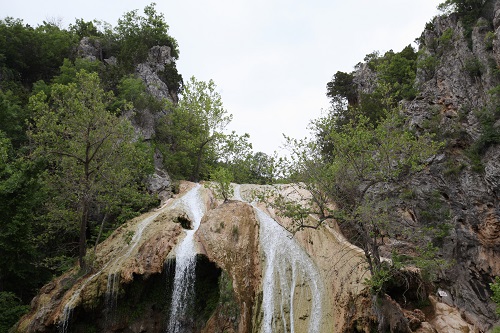 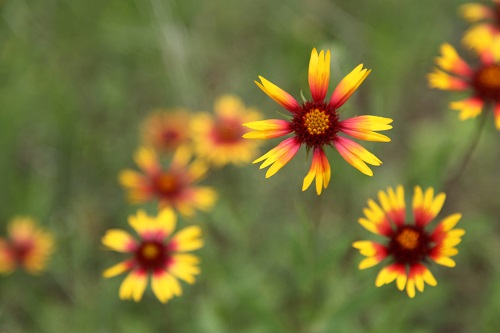 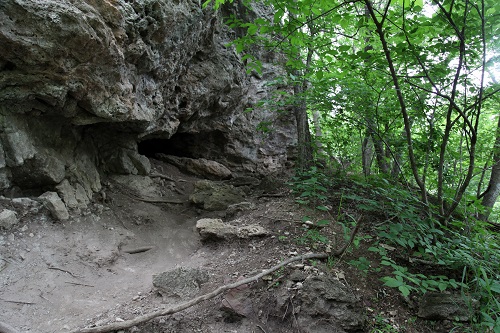 Between the falls and the furthest back area of the park is ample camping and rv space with shower area and a small laundromat. But to the back of the park, what is 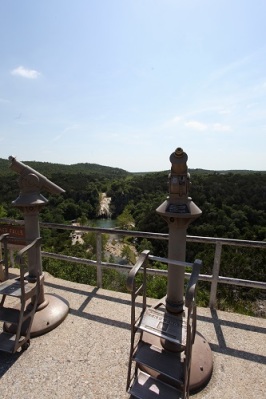 described on their park map as “primitive camping” areas are exactly that; barely cleared areas in the forest with a handful of services for the more experienced and nature loving camper.

It should be noted that the city of Davis maintains Turner Falls Park and there is an entry fee of $12 per adult (half off for veterans) and $6 per child. It is worth it for a day spent hiking, swimming, and camping, but if you are only out for a ride and don’t want to enter the park, as you enjoy the easy curves of 77 you’ll find a scenic overlook to the falls. Whichever you choose, this is a perfect place to disappear for a day.

Read more about the Arbuckle Mountains.