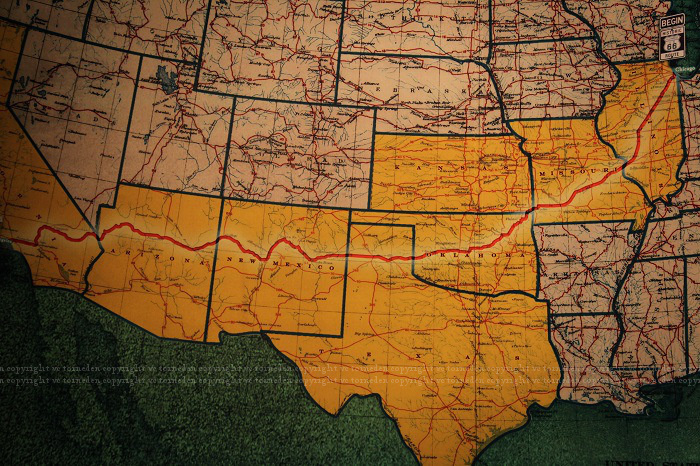 For all my romanticized prose about her, oftentimes traveling on what remains of 66 breaks my heart. Seeing the last remnants, dilapidated, renamed, partially hidden, like one of the classic cars that used to roll along her curves now locked away in a garage, half covered with a sheet, still loved just enough to stay out of the scrap heap. When I am on one of her more rundown sections or see vacant sad eyed business fronts or the remaining foundation where one of her once bustling businesses stood, it pulls hard at the heartstrings. But each trip along her lines I am reminded through various license plates there are still plenty of those who love her. Arkansas, Georgia, Illinois, Michigan, Pennsylvania, every one of them taking it slow, taking in everything there is left to see, reminiscing to something that may have been vanished before they were born. 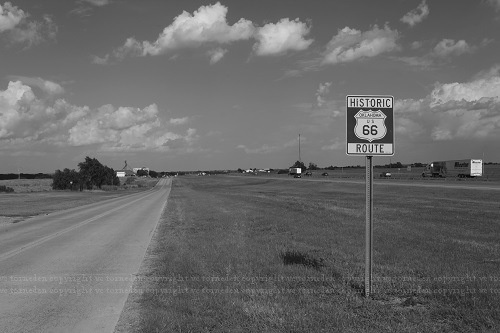 On that note I should tell you, we may even be famous in Italy now. Or anyway, that’s became a running gag for us since we stopped at a place I wanted to photograph and a group we had seen earlier pulled up and asked to take our picture with the highway behind us. I was confused, and it took a solid few minutes before it registered what the tattooed bikers ala 1970 must look like, the Americans. It had never occurred to me how iconic traditional we might look to someone foreign, when we often are not quite the average American’s vision of their tradition.

And it was that fascination with our tradition that was on full display when we visited the Route 66 Museum in Clinton. Various states were represented by the car tags in the parking lot and even inside where we overheard Portuguese and German as well as myriad of American dialects. A small collection of memorabilia, maps, signs, and even original neon are on display within the museum walls, but most interesting are the photographs on display. Each room represents a decade of the Mother Road’s existence complete with era specific photographs and stories documenting cultural clime and precise details of the highway’s status then, from her inception to her closure. Being partial to photographs and stories I was  immersed in her history and amazed at how she has mirrored the current of the United States since her earliest years in a decade of prosperity and innovation to her status now as a bastion for those looking back for what we lost along the fast track of so-called progress. 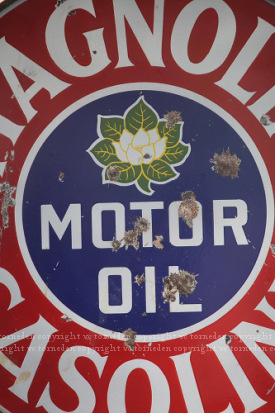 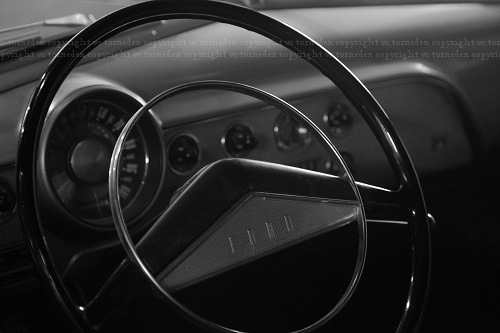 But it wasn’t until we stepped into the second to last room where  they play a video on loop about the official rerouting to the interstate that I was deeply moved and amazed. The room had the air of a funeral parlor and the video seemed to have a solemn echo while the faces of the dozen or so other visitors with us watched sad eyed images of sign removal and business closure, the sudden drying up of whole towns and the burning out

of the signature neons. The young men I had heard speaking German were watching the screen with a sad befuddled look on their faces, a young couple in the back looked as though they were struggling back tears, and the elderly couple who’d reminisced just barely above a whisper about the places in the pictures they remember from years ago in previous rooms now stood quiet arm in arm leaning on each other both smiling sadly. No one spoke as they left.

As I sat on the steps outside, staring at the concrete walkway they have set up in the shape of Oklahoma with a metal section blazing across it along the 66 route, I wondered not at the elderly couple but at the younger people who left so intensely sincere with no memories from her heyday but memories of 66 as she is now and how we will help preserve her for the next generation be it through taking real interest in our past and keeping her maintained through travel and the support of her remaining businesses or be it through the inspiring of others in your home country to visit Route 66 and see that she is still alive by showing them your photographs of aging but still blinking neons, renovated classic gas stations,  and the American bikers you saw on Route 66. 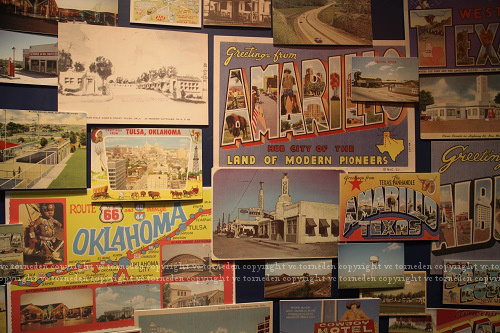