A few weeks ago, I discovered that one of the drive ins I was very excited to write about had been purchased, closed, and torn down…for a parking lot. The irony is not lost. And earlier this week I read that another drive in I had planned to cover, the abandoned Airline Drive In in Ponca City, is going in the name of new construction. However, before the demolition of the Airline, a local radio station and the community of Ponca City have gathered together to make the old theater suitable for a few farewell screenings and a reported 521 cars and over 1,300 people came to view the first of the final showings last weekend. This Saturday and Sunday will be the last times the screen is used before it is raised. If you would like to share in this piece of history before it is gone, details on this beautiful last gesture can be found in a news story here. 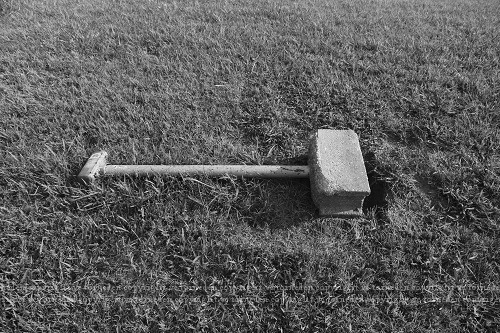 Motivated by these losses, this week seems like an appropriate time to post images from another of Oklahoma’s abandoned drive ins, one a good friend told me about when this series started. She remembers visiting it when she was a child and thought it too was gone. To be fair the 51 Drive In is only partially still there, although how is a mystery considering the urban encroach around it. The screen has been gone for years and little more is left with the lot being sadly open to vandals. After seeing the proximity of the suburban neighborhood immediately behind it and the businesses on either side, I opted to photograph what remained as it will no doubt be gone in the near future. With all these vanishing icons in mind, this weekend as summer rolls into its close and long evenings speed up their fall back toward shorter days, if you aren’t in Oklahoma to make the final screening at the Airline, please seek out your nearest still operating drive in and show them a little support. 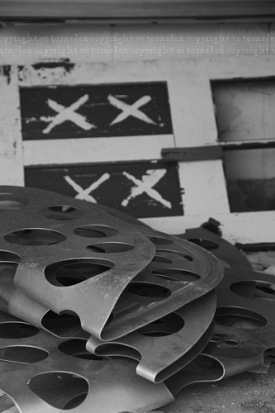 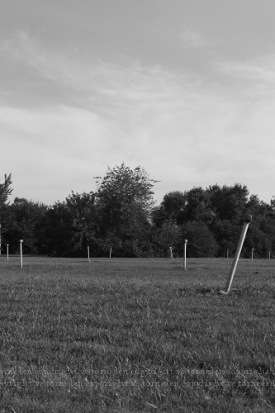 The 51 Drive In, located in Broken Arrow Oklahoma and originally named the Broken Arrow Drive In, opened in the summer of 1953. The 51 Drive In was named for the original 51 Highway on which it sat and although the highway was rerouted to today’s Broken Arrow Expressway, the name was left unchanged. It was a single screen theater with a 280 car capacity. In 1993 a storm destroyed the screen, prompting the theater’s closure.

Further information, including an article from the local paper at the time of the 51’s opening, can be found here.

21 Aug This entry was published on August 21, 2014 at 17:00. It’s filed under Oklahoma, Other and tagged 51 Drive In, Abandoned, Airline, Americana, Broken Arrow, Drive In, History, Oklahoma, Ponca City. Bookmark the permalink. Follow any comments here with the RSS feed for this post.