After the soothing warmth of coffee ordered with lunch, not because I wanted any, but because it was hot, and bundling in every stitch of gear we had available, the plan for the remainder of the day had been to enjoy the ride but move as quickly as possible so as not to be caught out come twilight in the cold. Unfortunately, the back road north to Shamrock had an altogether different plan in mind.

A patchwork of concrete and asphalt, repairs and potholes, slowing down was the only option. Each rumbling speed up at the promise of level decent road was met at the next curve by another batch of choppy asphalt blotches, strewn gravel and weather busted chunks of aged county road “charm,” so that by the end of the first couple of miles we gave up on speed and maintained the more cautious pace.

Turning off the highway and up to the remainder of the former main drag, my ears pricked after engine silence was followed by the long raucous brays of hunting dogs. Frozen, ready to take off in a split second, we listened for what felt like a much longer time than it actually was, but the sound grew no closer and certain the dogs were pinned, I began photographing. Usually one to explore while I shoot, Josh stayed on his bike, watching and ready to get at a moment’s notice while I have never shot a location so quickly.

On our way out up the road, in spite of a large old mutt brought out of hiding by our approach and watching us somewhat lazily, the stunning skeletal example 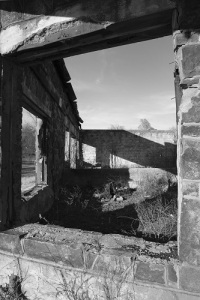 of twenties style seen in these photos enthralled me and moving slowly enough to examine every small detail of which there were many, I made my way around it, shooting each angle less for photography’s sake than for the sake of preservation. The sturdy rock walls reminisce of their past life, in spite of being only a shell. In the empty decaying sills, the glass was as easy to picture as the garage section of the interior with cars being cared for and the pumps out front, attendant at the ready. But that life is long gone, the building is rotting, the rock is infested with vines hibernating until they continue their dissolution of the structure in spring, and the last bits of wood frame work are deeply grayed and withering from exposure. Over my head the remnants of the tin roof still attached haphazardly to the outside walls thumped halfheartedly in the cold wind, a lonely sort of swan song they gave up on anyone paying attention to long ago.

Finally satisfied that I’d shot every angle of that gem I could and growing more sad by the moment at the waste of it, we loaded up, the mutt still eying us with an air of indifference. We loaded up without a word, immersed in the wastefulness of abandonment, until we started off and up jumped our four legged audience, much faster than his lethargy and gray muzzle hinted at, although just as disinclined to leave his repose for long as his chase only lasted six or seven feet before ending with a few unceremonious barks and a return to his nap. 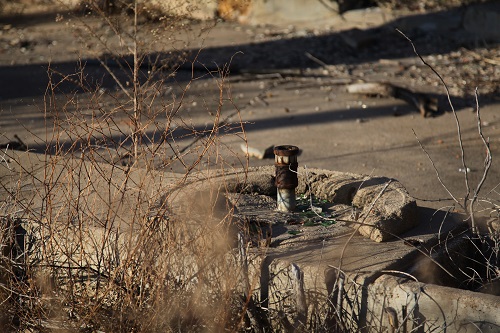 The charming street names went by, St Patrick, Dublin, Killarney, Cork and the town museum (a former general store on the highway corner) all brightly painted green, a common theme in the town’s past when it swathed itself in Irish pride based in its name, a moniker borrowed from the founder’s hometown in Illinois. Founded in 1910, the town was a quiet farming community until the Cushing Oil Field boom around 1915. The pipeline crossroads of the world, Cushing was one of the greatest producing oilfields of the last century and overnight boomtowns sprang up all around it. The quiet town of Shamrock grew straightaway from a population of dozens to a population of hundreds and with that rough new population came brothels, saloons, and gambling halls. But in the way of boomtowns, it hardly lasted a decade, and although Cushing is to this day an oil hub, Shamrock’s decline began in the twenties and continues still. The town was officially dissolved in 2010, although the proud remaining local population still celebrates the town’s Irish theme with a lively annual St. Patrick’s parade, yet another relic from the town’s past that should be taken in before it too vanishes.

If you do so however, be mindful of the dogs. 🙂