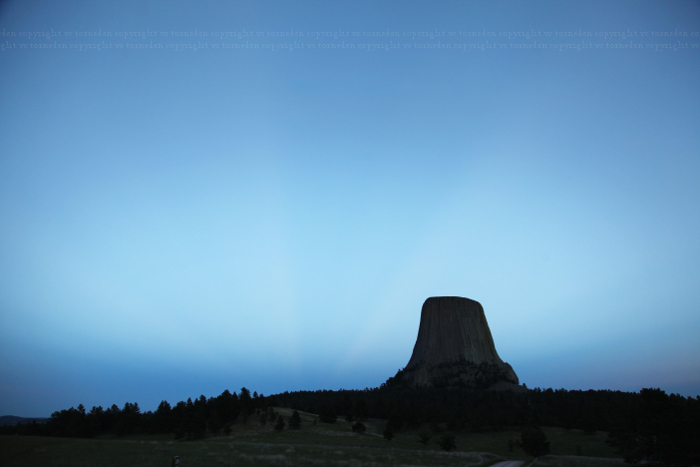 In the afternoon haze we left from Sturgis, out and onto 80 MPH interstate, and just that rapidly those stunning South Dakota hills were left behind me. A certain melancholy veiled me until the border, but oh that border. The road rose, a slighter and steeper grade, curving and winding, tracing around the rises and crests. Suddenly a large hawk, frightened by the sound of us while devouring his prey, shot up immediately beside us from a rock face, meal in talon, and so nearby, within a yard of my head, that every subtle nuance of its whispering wing beat rang in my head for miles. 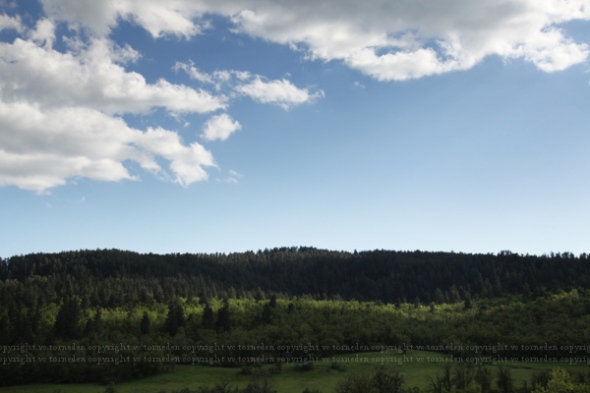 And the pines. Pines like nowhere else, a particularly heady smell of pride for their species, stronger perfumed and prouder. And those beautiful hills, majestic and mountainous in the slighter stature. Wyoming is and always has been, in my opinion, the most beautiful state in the nation. And yes, I have been to most of the states, and yes, they all have their beauty. But inch by inch, acre by acre, mile by mile, you’ll be hard-pressed to be as overwhelmed by every landscape in every square inch of a state as Wyoming. And yet, in spite of all that love, I had not yet seen Devil’s Tower. 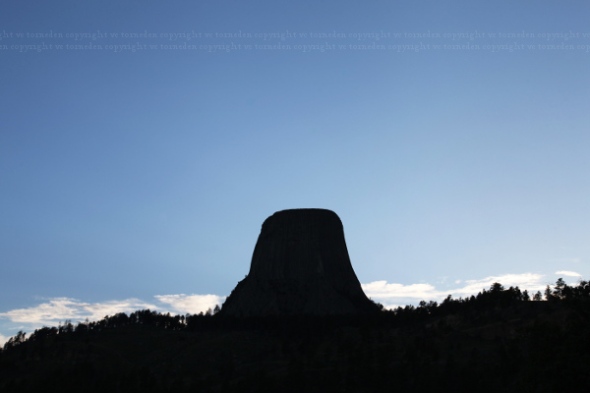 When I was a little girl mom bought me a travel book at a used book sale, one of those from the fifties or sixties with all the kodachrome unnatural colored photos and somewhere, midway thru, was the photo. The one that mattered. The one that stood out. Of all those photos, it was Devil’s Tower. Sentinel, majestic, and all those other accurate yet trite adjectives, that monolith spoke to me from a picture I never got out of my mind’s eye.

I couldn’t understand why it was called Devil’s Tower as a child, although when suddenly there it was on the horizon, I understood. Between the ominous melting effect of the stone even at a distance and the fact that from the high plains it rises especially tall and curved, like the cut off horn of a great devil sleeping, the name suddenly made sense. 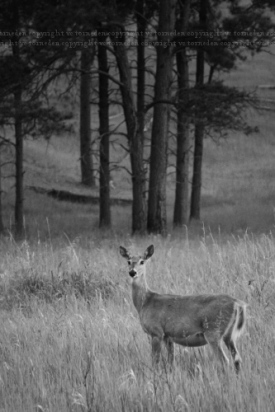 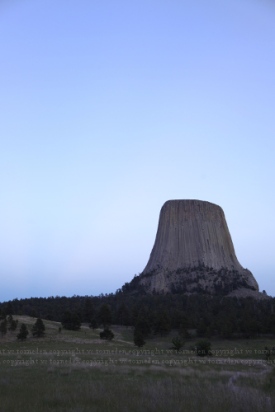 And I squealed, unabashedly and loudly as soon as it appeared. Up until that squeal I don’t think Josh really understood what seeing that monument meant to me, or just how long I had waited. But now we had arrived and as the sun set we drove as far up as possible, up into the sunset exaggerated by angles, past the bustling prairie dogs and the  feeding deer, the cackling black-billed magpies and the unseen watchers. Originally having intended to hike, the day was too late in our whirlwind tour and the bike was being persnickety. So, while Josh taught E the finer points of motorcycle mechanics, mom and I partook of another of my childhood flashbacks directly attributable to her, this time in the form of her sci-fi affinity, but no less keenly related to Devil’s Tower.

“You know when the saucer responds in low key? That scared the hell out of me as a kid. I didn’t know what your aliens wanted, but I wanted no part of them.”

Mom had laughed at me when I explained, much inspired by Route 66 our desire for KOA membership, until that is, Devil’s Tower KOA. With her proclivity for sci-fi, when I told her the KOA site at Devil’s Tower was the filming location of Close Encounters of the Third Kind and that they do nightly outdoor showings in season, she was sold. And there we sat in her car, separate from the crowd, watching the adventures of Roy Neary in the shadow of Devil’s Tower, each of us glancing constantly at the sky for anything, anything damn it. Even the low key, mildly unnerving ship. Skip the luggage, we’re in. This is how far we will go.

The view from our cabin. 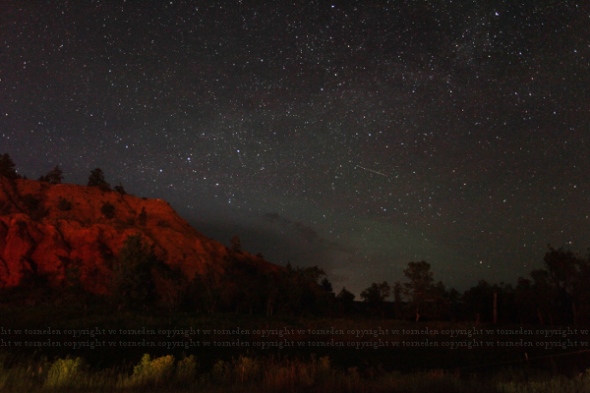 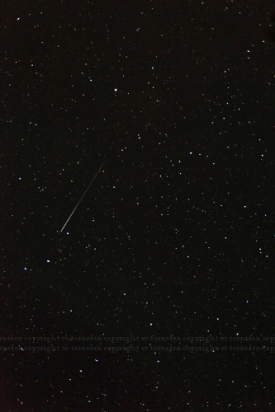 Instead there was reminiscing, bonding, and a new memory attached to a classic. Back at our cabin, mom and E played on the porch while I set up the tripod for shooting the all those amazing stars until we were all too tired to take it all in anymore. Not too tired to be woken by the blue predawn mind you, for me anyway, with a new regal quiet cast on Devil’s Tower and a new day like no other. How people can live in view of the tower and not wake with a fresh perspective every day is unimaginable. No less enthralled by the views of Devil’s Tower and Missouri Buttes as we left, we made our way to Sundance for breakfast, a debate ongoing as to whether the Sundance Kid was named for a robbery or birthright (robbery, if you aren’t as avid an outlaw historian as I). 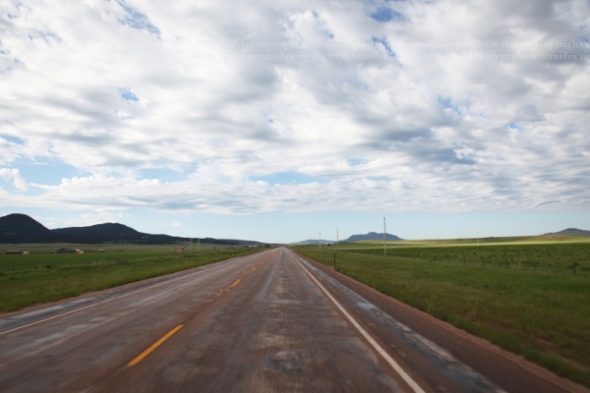 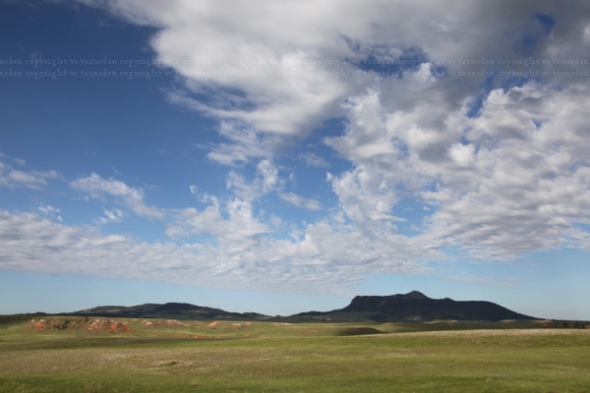 The quiet between engine noise was glorious and the morning cool stayed with us until we wound our way down from the hills and into areas clearly labeled as being without gas stations for fifty plus miles, areas where but for buttes and chop hills the land laid still, an ancient ocean floor, a sea of sage and wind and sunlight filtered thru haze. Few bikes had passed us before, but now none since Gillette, and even then only a lone one percenter, obviously local. Passing cars came fewer and fewer. More populous were the antelope, more than ever I’d seen and midway to somewhere we had to stop, not for exhaustion or sore ass but for that same feeling of crushing overwhelm taken upon swimmers in the sea when no land is in sight. 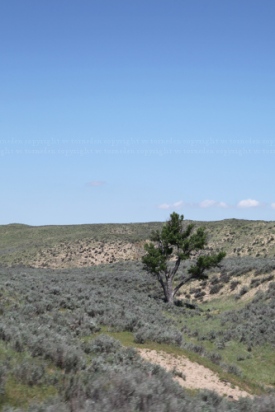 And a buck, still in his velvet. He stirred and up the hill he raced away from us before the land went wide and the rock chalk was back and we swam and swam and we made Cheyenne on the other shore of that beautiful ocean. 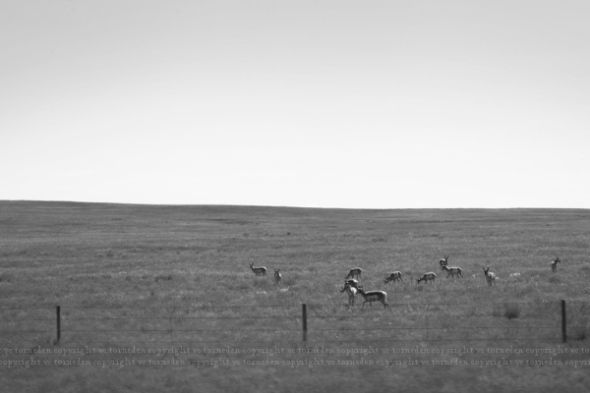 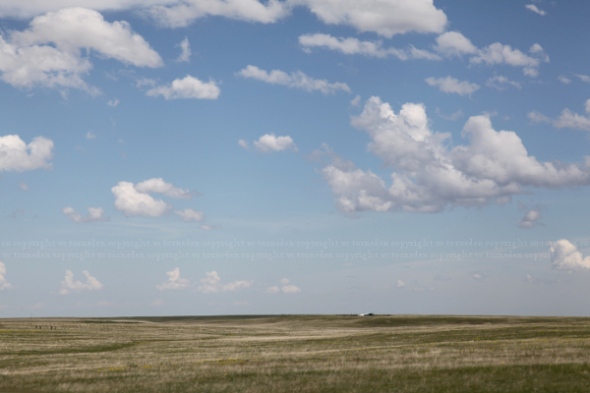 I strongly suggest the KOA campsite at Devil’s Tower. It’s a great facility and the amenities are especially perfect for riders. For more information, see here.

And as of recent I was asked to contribute to Rider’s Digest. If you haven’t checked it out before, you’ll find the latest issue here.

Older: The heart of everything that is.
Newer: Heart.

8 thoughts on “The least populous.”