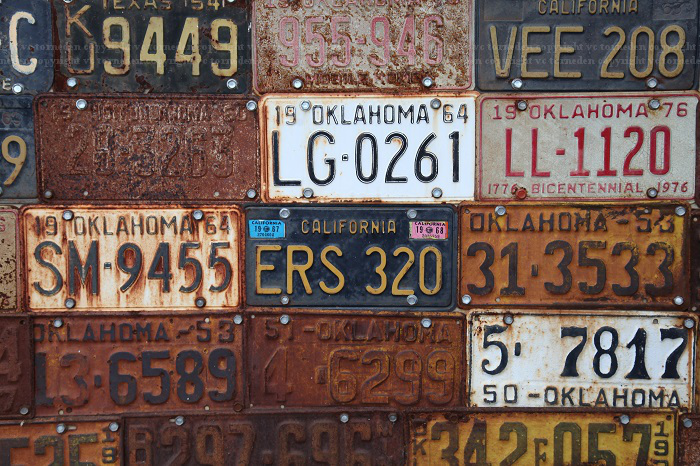 Later birds on the sixty-six road.

“Claudy! This is the 66 road!” E gets excited lately whenever she sees a Route 66 sign and she knows the segments of it we’re on regularly by heart. Apparently my love of it is rubbing off on my family and since Sunday was more akin to a perfect spring day than mid-January, we spent the morning making our way to Tulsa at a meandering pace pointing out sights while E drew pictures of the road and snapped pictures of the views she felt were worth asking to use my camera. 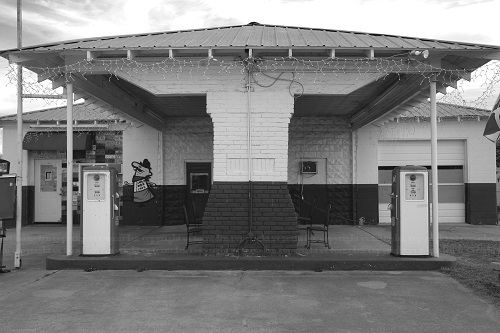 In an effort to check off the last handful of Oklahoma’s Route 66 hubs we haven’t visited before, we wound our way along the highway to Davenport and the Early Bird Café. A kitschy combination of being built in an old gas station and being covered with automobile related paraphernalia and homemade signs, that little outpost has caught my eye on more than one occasion, but we never seemed to be passing when we had time to stop in or when they were open as they keep more traditional first of the morning thru early afternoon hours. Worth making them a stop on your next trip? Absolutely. The staff is so friendly and they do not skimp on fixings and homemade quality with their food. Not to mention some of the best damn biscuits and gravy I’ve ever had at a diner; homemade biscuits and gravy that actual tastes like gravy, not like flour paste as the powder premade kind does. But it’s the building I really loved, especially after the number of collapsing 66 gas station ruins I’ve photographed. 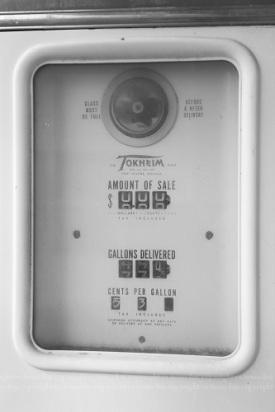 “Do you know what this building used to be?”

“See the gas pumps out front? It was a gas station. This is what they used to look like.”

E’s eyes got wide with wonder and she started assessing the entire place, first ceiling to floor then craning forward to see all the detail she could outside the windows. While Josh and I briefly commented on the sad state of modern “architecture” by comparison to the old school of design, she seemed to reach a point of satisfaction with her investigating before asking, “This building is really old?” 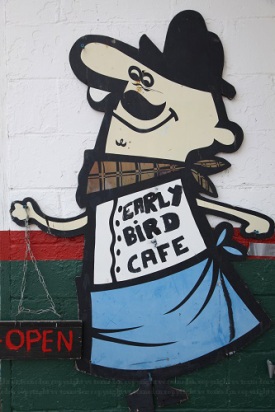 “And since it’s old we have to take care of it and not kick it or throw rocks at it?”

Laughing, “You should not kick or throw rocks at anything, but yes, it is extra important to take care of older buildings.”

I watched the crowds of motorcycles going by outside the window before becoming wrapped up momentarily in studying the fine detail of the chipped paint on the underside of the aging eaves.

“Have you noticed they aren’t looking around when they go by? They’re missing the point of riding.”

The soft blue light through the former garage windows created a lazy atmosphere perfectly suited for the day and across from us, the chatter of the beautiful woman with the heavy dancing Hispanic pronunciation of otherwise mundane words to the quiet, stoic local man with the farm worn features became soft background music. 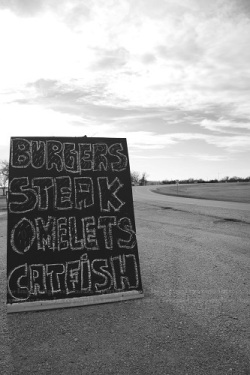 E, who had been thoughtfully quiet, drinking her milk and pondering suddenly asked “Claudy, why is the 66 road important?”

It occurred to me only a five year old would pose that question to me point blank. Everyone else just sort of takes it for granted, that 66 is a permanent fixture, that its importance is obvious. After some turning over and over of that thought, I have to wonder if when the reason for its importance is taken for granted will not also its preservation be taken for granted until one day it simply isn’t there anymore and we’re all left to wonder at having known it was important but not knowing what we did wrong, how we could just let it vanish? Is this how history is passively lost generation after generation? Not by people who don’t care, but by people who just assume it will always be there. Not by malice, but by a great inactive naivety.

With the loss last week of one of the most important people in my world, those are the thoughts I have now. After a trip back home for his service, after seeing the last of the elder generation of my roots, after seeing mountain towns I loved years ago drying up, I am imbued with a new certainty of the importance of preservation and tradition, with concrete evidence of the importance of what I and likeminded folk do when we play our small roles in safeguarding the antiquated. Who will remember when history fades? Who will preserve legacy, find or create a place for it in the modern zeitgeist? Who will remember the lessons of the past so as not to become part of the damn cliché that goes along with forgetting? That, in a philosophical nutshell, is why Route 66 is important. It isn’t just the road and it isn’t just faded Americana, it’s the history, it’s our past, it’s part of where we as a people and a culture come from, it’s part of our fabric as a nation. It’s living history and like so much of our heritage it mustn’t be left to die.

4 thoughts on “Later birds on the sixty-six road.”