From Roger Mills County in Oklahoma, you can see past the western horizon. The world just keeps going, on and on, no clear marker to dictate a fine vanishing point or an end to the landscape, just layer upon layer of hazy steadily fading silhouettes diminishing into West Texas and further beyond.

I’m not certain I’ve ever been anywhere so hushed, as though the land itself was in repose, meditating softly on some primeval insight that leads only to blissfully lying and staring up at the sun. Sometimes a light breeze would blow, but firing up the engine actually made me feel bad, an abrupt interruption to perfect tranquility. 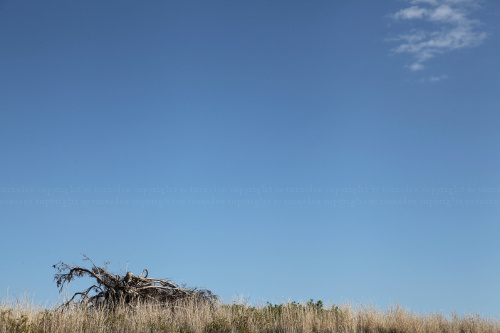 Having wanted to see the Black Kettle Grassland for some time now, it was much more than I had imagined, a great sea of sage and grama, too expansive to describe and to ancient to understand consciously. And we burned the day away, looping highways and taking in all there was to see in the sparsely populated vastness. 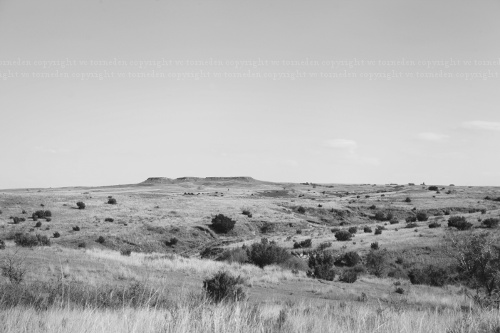 To the north are the Antelope Hills, quietly looking west, perfectly posed as though they’d just stepped out of one of Remington’s paintings. A registered national historic landmark, the hills have long been an important landmark for the plains tribes as well as the later Spanish and settlers pushing west on the California Road. Today they sit quietly, not especially concerned with us or anyone else who traversed their landscape before. They are the constant and we are the change to which the constant has become accustomed in the way all things unchanging become accustomed to the brevities.

From within their ranks we took in their view, to the west and to the east, and stood in the silence wondering at the view for a bit better than a half hour, the uninterrupted quiet, considering the people before and the people after, and the land forever and ever. Looking from the hills in the afternoon haze, you see what they see, even further past forever on that never-ending horizon to where the infinite is looking back at us.

A note, if you would like to become a more experienced rider, come on one of my adventures. Blacktop, country road, dirt road, gravel road, a little bit of washed out shale, cattle guards, yeehaw! We cover all the bases. And they, currently along with a particularly nasty dug out hole from all the recent storms, are involved in getting up to the Antelope Hills. The highways around Cheyenne and the Black Kettle Grasslands on the other hand fully turn the notion that all highways in Oklahoma are in some level of disrepair on its head. They were a perfect smooth ride.

Older: Remembrance.
Newer: On the riverbank.

One thought on “Grassland.”