In keeping with its usual fashion, the weather in the Sooner state took a wide swing back toward the warmer side last Saturday, and knowing this in advance we planned a quick jaunt up the highway to stretch the new project’s legs and enjoy a final ride of 2013. She’s coming along nicely, but not wanting to venture too far without having found all the knocks and quirks, we opted to stay within a twenty five mile range and so ventured our way up to Guthrie, Oklahoma.

While researching the original state capitol, I discovered a mass of history all waiting only twenty minutes from our house for an adventure. Have I mentioned I devour all things history related? I’ve been this way as far back as I can remember. But Guthrie was more than an adventure when we arrived. As we rode up the highway toward the Guthrie exits, I tried to imagine what it was like for those Sooners and 89ers racing to fulfill the primal urge to exist in a solid place, man’s need to have a parcel of earth his own, the dream of achievement that comes with a piece of God’s own creation to tend and love. It wasn’t hard to imagine either. The land north of Edmond and around Guthrie is still rural rolling farmland and ranches, wide open and far reaching. 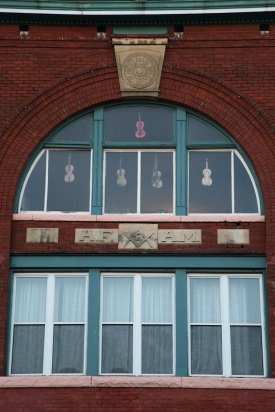 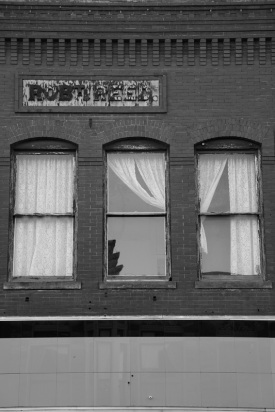 And the town of Guthrie itself is ineffably lovely. As though the bike had just become a time machine, we rode straight into the past, every building stoic, proud, and perfectly preserved. 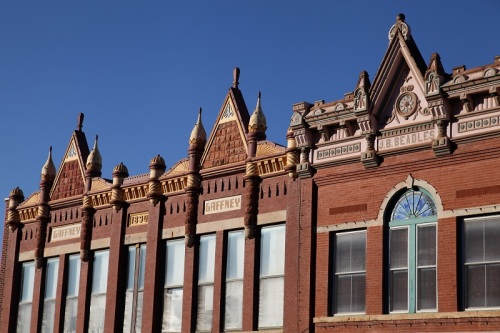 I should back track a bit and explain what started this whole yen to see Guthrie. In one of my moments of love for things macabre, I stumbled upon an article about Elmer McCurdy, the sideshow mummy. It seems that McCurdy, a train robbing outlaw from the Oklahoma and Kansas territories, made his way much further west…after his death. At a Long Beach amusement park haunted house, during a filming of an episode of the Six Million Dollar Man of all things, an actor accidently pulled the arm from what was thought to be a prop mummy until they saw the bone inside. Foul play assumed, panic ensued until the coroner conducted tests which proved the mummy was in fact a body from before the turn of the century. After much detective work and contacting the crime museum owner who had displayed the mummified body before its lending out and subsequent disappearance, they uncovered the mummy’s true identity as criminal Elmer McCurdy and sent him back to Oklahoma for burial.

Thus our first stop was the cemetery, straight through the wrought iron gates and winding up the road to the old Boot Hill section. There, under an old birch tree, prominently sit large markers for both Elmer McCurdy and the notorious Bill Doolin. I say prominently because with only a handful of small markers, some obviously later installed, others original found rocks with names and sometimes dates etched deeply enough to only barely protect them from time’s wear, sadly the majority of the rest of boothill is unmarked. This was an interesting challenge for someone as superstitious as I trying carefully not to step over, or on, anyone’s final resting place. As the wind picked up, I remembered the episode of Twilight Zone with Lee Marvin as an old west gunslinger who goes on a dare to his enemy’s grave and dies of fright when the wind pins his coat under his knife. Or was it the wind? Spooky indeed. 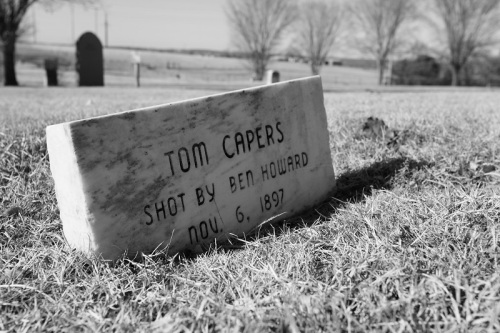 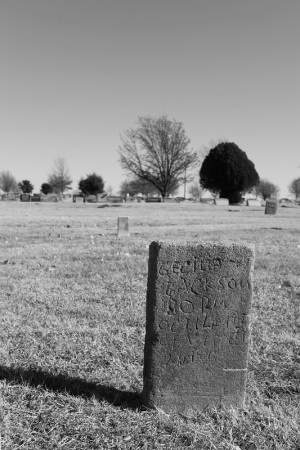 After reading all the gravestones there were to be read, we ventured into town, and promptly had to circle a few times around the blocks to see and re-see each of the beautiful buildings.

The preservation effort of Guthrie is astounding, with most of the original buildings being registered national historic landmarks and a backing civil effort to maintain even the slightest details.

Many of the buildings were the unique vision of an architect named Joseph Pierre Foucart, clearly intended to create an impressive cityscape façade for a town originally slated to be Oklahoma’s capital. Building on a foundation of typical Old West Victorian building style, he diverged from the simplicity of other cities of the west by adding a heavy dose of French gothic trimmings from turrets and imposing archways to contrasting stone flourishes and very Belgian influenced brightly colored reliefs. 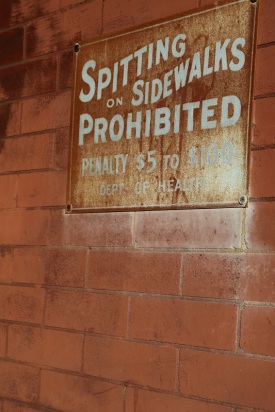 After a bit of exploring, lunch was in order and for that we had settled on the Blue Belle Saloon, an original watering hole and eatery known for its history of hosting famous names and for being the work place of silent film star Tom Mix in his pre-acting bartending days.

We discovered when we arrived that on Saturdays mock gunfights are held in the street outside in the intersection between the Blue Belle and the print museum. The Guthrie Gunfighters are a group of reenactment actors actively involved in preserving Oklahoma and the surrounding areas’ Old West past. At the top of each hour, you can be audience to their constantly changing sketches, homages to the many characters who wove the fabric of the past. 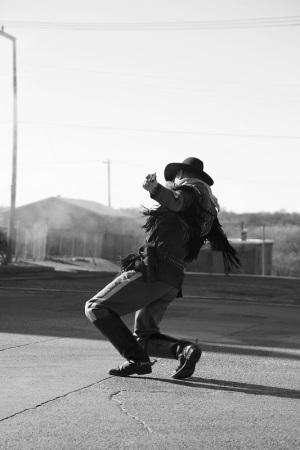 Like the town itself, walking into the Blue Belle is like walking into history in spite of any modern touches made. From the player piano in the corner to the grand dark stained bar and back to the tin ceiling pocked with bullet holes from wilder years, it is living history. Throughout our meal, I found myself studying and restudying every inch of the interior, curious about every detail. 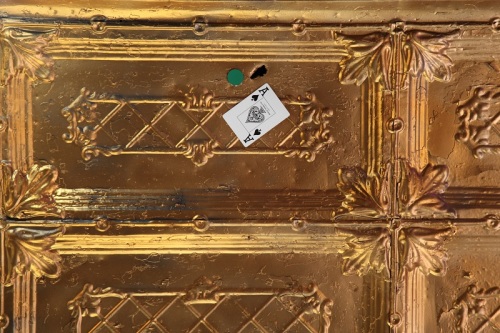 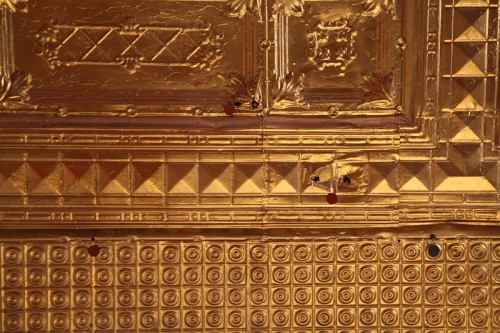 Atop all that excitement, I was very pleased to find that even the food at the Blue Belle was in no way disappointing. So good were the burgers in fact that we intend to make the Blue Belle a regular trip. The Blue Belle burger complete with crispy bacon and bleu cheese is amazing, by the way, and the fries are fantastic. I overheard praises for the bread pudding, but we were both much too full from the large burgers to have any desert. 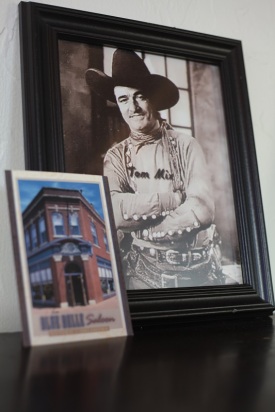 More riding was in order after lunch, enjoying the gorgeous cool weather, beautiful views, snapping photos, and reading every historic placard we came across, before finally venturing to the Oklahoma Territorial Museum. Originally a Carnegie Library built in the town’s early years, the museum was later added next to the library so as to preserve the library and house Oklahoma’s statehood story. 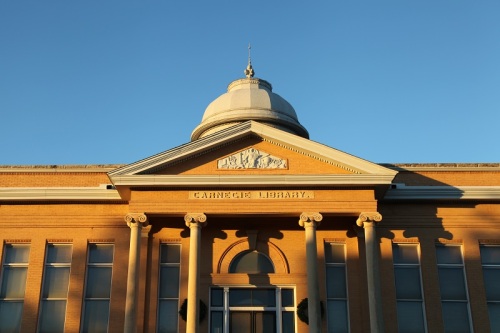 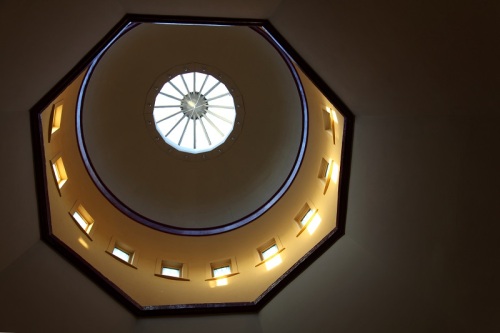 There was a time when museums like these bothered me as they, like old history texts, tended to take the side of the victor with regard to how history actually played out, but in our current social clime museums have been given license to be much more brutally honest. The Territorial Museum took that approach and I was very impressed. 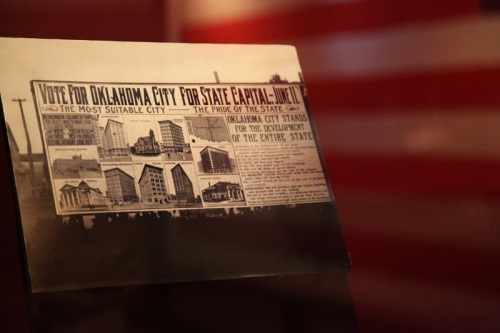 Without chastising any of the people of the past, or over sympathizing with those trampled under the feet of greed and progress, the museum lays out in time line fashion a very unbiased series of facts with interesting side notes through displays of both examples of items from that era as well as photographs and possessions of those people who shaped Oklahoma’s early statehood. They address everyone from the Native American tribes to the Boomers and Sooners, from the 89ers to the railroad tycoons, from criminals and outlaws to the corrupt politicians and those who fought for the rights of the impoverished. Of the many displays in the museum, one of the most interesting is an actual shack lived in for nine years by an 89er on his claim. It was dismantled piece by piece and reconstructed within the museum.

As we rode away under what has to have been one of the most beautiful sunsets I’ve ever seen, I found myself looking back at the town and the rolling hills, turning over and over in my mind the stories of the many past people’s we had read and heard about that day. So deep did the stories etch themselves in my mind that even over the course of the following days I’ve found myself wondering at the lives those people led, at the hardships and courage, at the depth of character defined by the need to do more than simply survive.

Thanks to the Blue Belle Saloon for your hospitality and to the Guthrie Gunfighters for the entertainment.

Find more information on the city of Guthrie here.